jQuery plugin widget which support the definition of complex recurrence
rulesets based on RFC5545, the iCalendar standard.

The recurrence rule string, generated by this package, should be directly
usable in ics calendar files. It was developed for the Plone, but is
completely independent of the web-framework. This widget is production ready
and used in several sites. 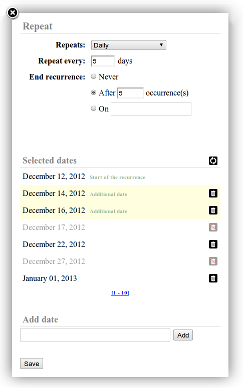 This widget does not support all features of RRULE’s. For example:

Requires jQuery and jQuery Tools datetime widget and overlay support. It is
currently being tested with jQuery 1.4, because that’s what plone uses, and
jQuery 1.7, because that is the last version supported by jQuery Tools.

jQuery 1.5 may work but is untested. Bugs in jQuery 1.6.4 means it does
not work. jQuery Tools doesn’t support jQuery 1.8 yet.

To test, demo or develop jquery.recurrenceinput locally you need to run a
local server, provided in the test_server.py script.

This server requires the dateutil module, so you must install it first.
Here are some examples of how to do this, depending on your platform:

A non-system Python 2 with setuptools or distribute installed:

And Open the tests: http://localhost:8000/tests/tests.html

The demo/input.html document contains basic usecases and can be used when
developing on this widget.

You also need to run the tests. These are located in tests/tests.js, and use
the QUnit test framework. You run them by opening tests/test.html in the
browser. The same issue with allowing Ajax from the local hard drive is in
effect for the tests as well.

In the tests directory there is also a copy of jslint.js, for easy access.
To run these you need to install a JavaScript engine, such as
Rhino or SpiderMonkey. You then run it with:

The following files should be jslinted:

To keep the Coverage tests updated you need to install jscoverage
( http://siliconforks.com/jscoverage/ ). You then keep the coverage code
updated by running:

To run the coverage tests you go to
http://localhost:8000/coverage/jscoverage.html?/tests/coveragetest.html

This project was originally started by Rok Garbas.

Thanks to Hexagon IT, http://www.hexagonit.fi/, who funded the main body
of work, done by Lennart Regebro.